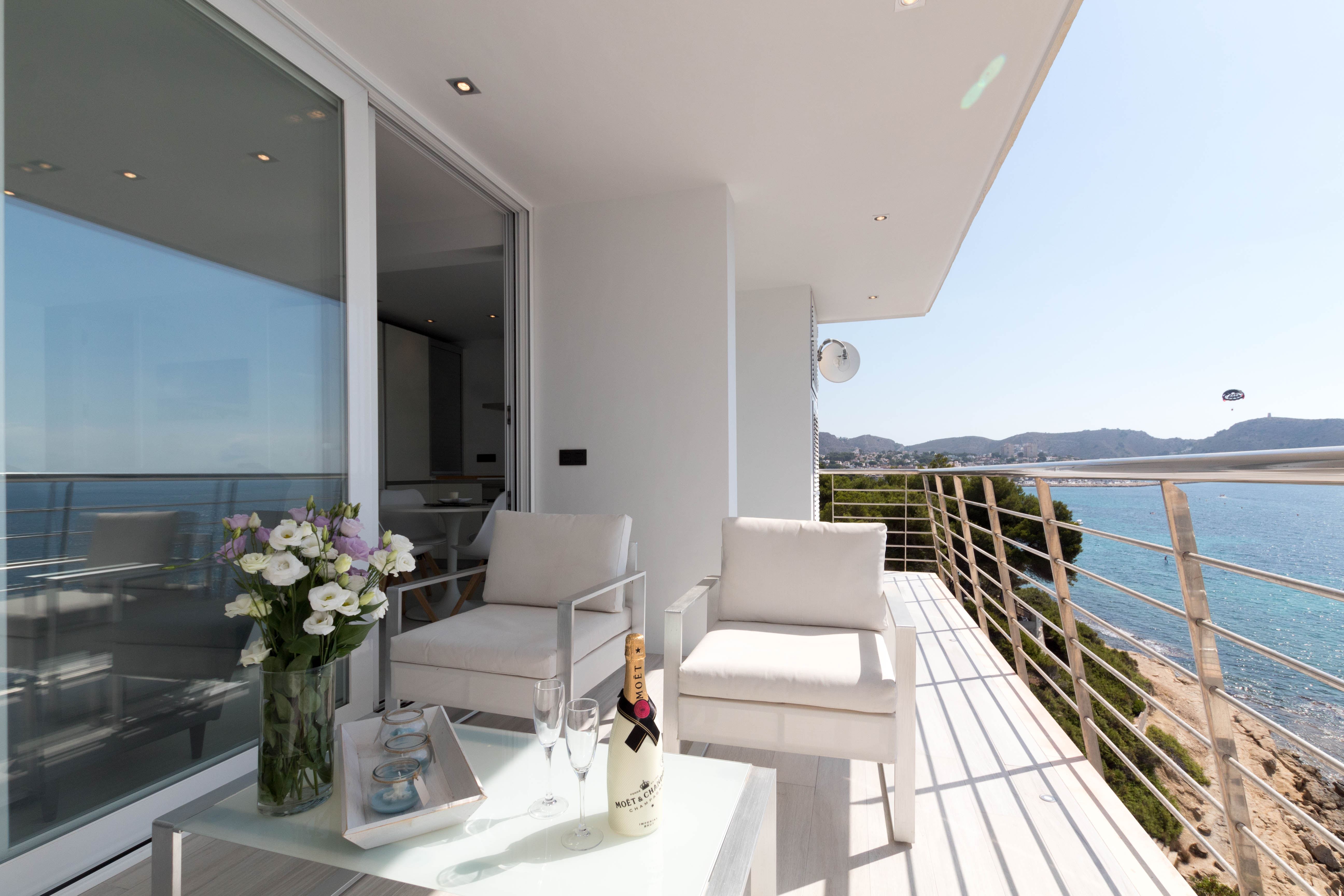 Teulada Moraira is a small and very nice town with natural beaches, coves, rocky and sandy beaches; an old fishing village that has developed in the recent years, especially in the summer months as a popular touristic destination, but preserving itsoriginality. The castle on the beach is the emblem of the city.

The distance between Moraira and Alicante is 77 kilometers, very easy to travel thanks to the AP-7 highway that conects them. And its not much further away from Valencia.

In addition you can enjoy spectacular fireworks, horseback riding and Heifers Moraira celebrates the festivities of Moors and Christians during the first fortnight of June.

Teulada-Moraira is a touristic town and one of its greatest attractions is the beach.

1 Probably the most famous is the Playa del Portet, small and shell-shaped, sheltered by the peninsula of Cap D'or. From this beach, a simple route of hiking starts, through a natural landscape.
2 At the foot of the Castle stretches the beach of  l 'Ampolla , the busiest beach of all, made of fine golden sand. The tranquility and quality of their waters and the proximity to the urban core of Moraira makes it a beach where you can find the best services. In its surroundings you can enjoy the Marjal del Senillar, wetland declared a Wildlife Reserve.
3 The Platgetes; Two small beach coves with clean water that alternate areas of fine sand and rock. They have an attractive walk-viewpoint with garden area andparking.  In it we find an access channel to the sea for small boats.

4  Moraira also has four quieter coves with transparent and Crystalline water that are called Cap Blanc, L'andragó, Pôrtitxol and Llebeig.

Beautiful apartment and location. Very clean apartment and towels left for each guest. Laura left water, wine and crisps upon check in which was a nice touch. The apartment is directly on the sea front, with the ability to walk down some steps directly to a rocky beach. Across the road there is a handful of restaurants.

It is a great, modern apartment with stunning views. Just a short walk to Moraira. Traducir

This is a beautiful apartment with the most amazing view. We were able to walk everywhere and looking for ward to our next visit.

Stayed at this apartment 8-11. The views are fantastic from the balcony, the apartment was spotless and very modern. It was in a great location 10 mins walk into centre. Our friend were at camping Moraira so ideal for this. Also the Olive tree restaurant was amazing across road. Would definitely stay again just to have coffee on the balcony every morning with that view.

This is our second visit this year, the location is super

This is a beautiful apartment and the location is perfect for walking into Moraira. There are some very good restaurants within a few minutes walk - our favourite was ‘Tasca 42’. The balcony is perfect for relaxing and enjoying the amazing views!!

Perfect location - this property lives up to it's "front line" description. The terrace affords stunning views, and is very private. The apartment is well equipped and finished to a high standard. Location is great - amenities on the doorstep and a pleasant walk into Moraira itself. Highly recommended.

The views were stunning and the apartments was beautiful, clean and as described. Parking was easily accessible and secure. Communication with Laura was excellent and timely.

Front line apartment 4th floor (no lift) once inside you forget about the stairs,bright,clean ,comfortable,this apartment was great in every way stunning views up and down the coast ,we felt right at home here every thing new ,comfy beds great shower,secure parking and 4/5 good restaurants 2 mins walk over the road

Amazing views of the sea and beautiful balcony to sit on! Very modern comfy apartment.

Very nice apartment - almost new - just in front of the sea. There is everything you ma y need in the kitchen. Many nice sweet things in apartment. And also nice smell :)

The view from the apartment is just amazing, whenever you enter it, thr room reflects the ocean with it’s wonderful blue color! The apartment has everything one needs and I can highly recommend it!

Laura and Pascal were very good hosts. The apartment is beautiful with incredible views. There was some unexpected work going on two floors below. Pascal managed to ensure the work didn’t disturb our stay. Would recommend to friends to and family

The balcony and view are amazing. The sound system, kitchen, bathroom, bedrooms, location, and decor are all about having a great summer stay!

The apartment has just been refurbished to a very high and tasteful standard. The apartment directly overlooks the sea and the sunrise from the terrace is spectacular. The location is excellent for local restaurants and only 12/15 minutes walk into Moraira centre. The only issue we had was the WiFi speed but Laura said she would look into that as we were her first quests.

This apartment is exactly as the photos show. The balcony and terrace is amazing - the view is purely stunning. The apartment is kitted out to a very high spec with all mod cons, including Sonos speakers that we could connect to automatically. The location is great as well, a couple of minutes from a number of good restaurants and cafes, with its own private (rocky beach) and a few minutes walk from other sandy beaches. It's only about ...